From the Review by Jayden Lohe, City News

THE Canberra Choral Society – a Canberra-based symphonic choir turning 70 years old this year – has returned to the stage for the first time since July. In the first of four planned concerts for 2022, the more than 50-member choir presented an exciting selection of lesser-known and perhaps underrated works from the 19th and 20th century English sacred music tradition, much of it the product of the English musical renaissance occurring at the time. A full house at the Wesley Uniting Church welcomed back the choir, evidently excited to hear the sound of choral music that has been so lacking from concert halls since the onset of the pandemic.

The choir, conducted by music director Dan Walker and accompanied by organist Sam Giddy, sang passionately and brought out the contrast and character of each work. The ensemble underscored the quality of the music from the 19th to 20th century English musical renaissance, which Walker explained was spearheaded by or greatly influenced many of the composers in the program. 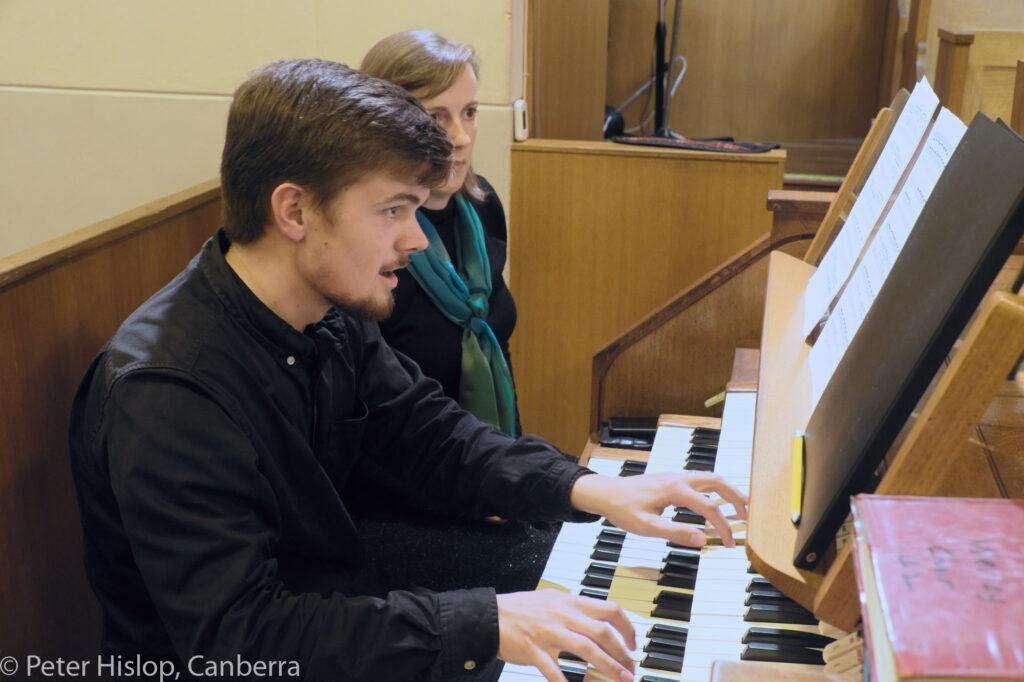 The concert began with a joyous anthem by the 20th century composer Gerald Finzi titled “God is Gone Up”. The anthem began with an exciting organ fanfare and was followed by the joyous sound of the choir. It was a superb beginning to the concert.

... Organist Sam Giddy performed a short work for solo organ by the contemporary English composer Paul Ayres. “Fantasia 150 for Organ (Toccata for Eric)” was an exciting piece full of repetitive rhythmic patterns and colourful harmonies underneath, and Giddy delivered a commanding performance.

... Despite the significant challenges of COVID-19, the Canberra Choral Society presented an excellent first concert of 2022 that showcased the beauty of 19th and 20th century English sacred music. With 2022 being the Choral Society’s 70th birthday, it is shaping up to be an exciting year for the ensemble. [...]

From the Review by Rob Kennedy, Limelight Magazine.

Brahms' German Requiem performed by the Canberra Choral Society and National Capital Orchestra was a real blessing during these trying times. Brahms’ Ein Deutsches Requiem,presented by the National Capital Orchestra (NCO) under the baton of Leonard Weiss, with soprano Rachel Mink and bass Andrew Fysh, and chorus master Dan Walker leading the Canberra Choral Society (CCS), was just the blessing needed during these trying times. Performed before a large audience in the Llewellyn Hall in Canberra, this was one of the few concerts going on in Australia at the moment due to COVID lockdowns.

When first performed on 1 December, 1867 in Vienna, Ein Deutsches Requiem(A German Requiem) by Johannes Brahms was a scaled-down version of what we know today. It remains an ambitious work for a composer aged 33. Verdi was 60 when he wrote his Requiem and Fauré about 55.

The growing melody for orchestra that envelops the opening part of Ein Deutsches Requiem soon built to include the 60-strong choir. The orchestra is almost subservient to the choir throughout this work. The unique orchestration in the opening part...[...]

Masterful performance of ‘A German Requiem’

From the Review by Clinton White, City News

Despite its decade-long gestation, unusual construction. multiple revisions and early controversies, Johannes Brahms’ “Ein Deutsches Requiem” (“A German Requiem”) has stood the test of time and remains one of the most popular choral works in the catalogue, especially from the Romantic music period. This performance, by the National Capital Orchestra and the Canberra Choral Society, not only drew on that popularity, but respected Brahms’ pen mightily.

After a slightly shaky start, in which the horns and lower strings struggled to find the right balance and volume (it was pianissimo – or very soft), the whole ensemble soon settled into a masterful performance under the direction of conductor, Leonard Weiss.

... Chorus master, Dan Walker, had prepared the choir superbly, achieving lovely tone and balance and silky-smooth dynamics. The 4th movement chorus, “How lovely are your dwellings” stood out for its beautiful, flowing lyricism.

... “A German Requiem” is a quite long work – almost an hour – but this performance held its audience in a state of bliss from beginning to end. Its excellence was duly rewarded with long and sustained applause. [...]